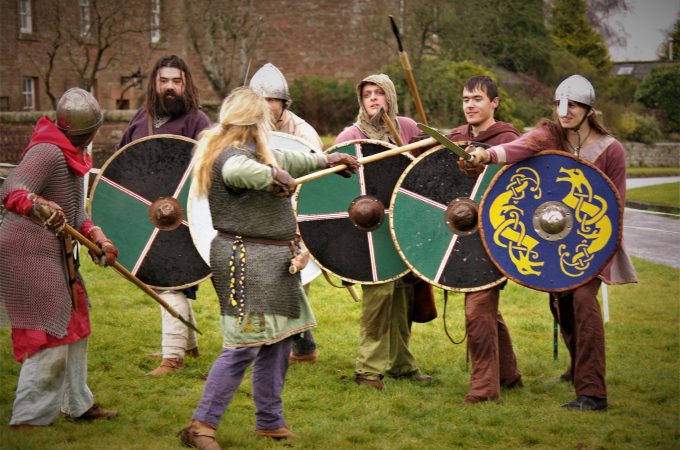 The first ever Viking Festival at Cumwhitton was held on Saturday, 3rd February. What an amazing day! Although there were light showers through the day, nothing could dampen the enthusiasm of all those who attended. The day began with a “Viking Film” in the Village Hall. Kirk Douglas made many folk happy. On the Village Green a group of Viking reenactors brought history to life with fighting demonstrations, presentations on life as a Viking as well as costumes to try on and food to eat. Axe throwing was exhilarating and a skill that is not often seen in Cumwhitton. At dusk the atmosphere changed completely. Dozens of Parish residents gathered in a variety of Viking costumes. The fire torches were lit and the procession began with chants to Oden. Leading the way were those carrying the Viking boat and the horn blowers. The final destination was the site close to the Viking Burial Graves where an enormous fire received the Viking boat while a prayer to Oden was recited. All very atmospheric. The evening concluded with a Viking meal at the Pheasant pub along with memorable entertainment.
We are hoping that the Viking Festival will become an annual event.