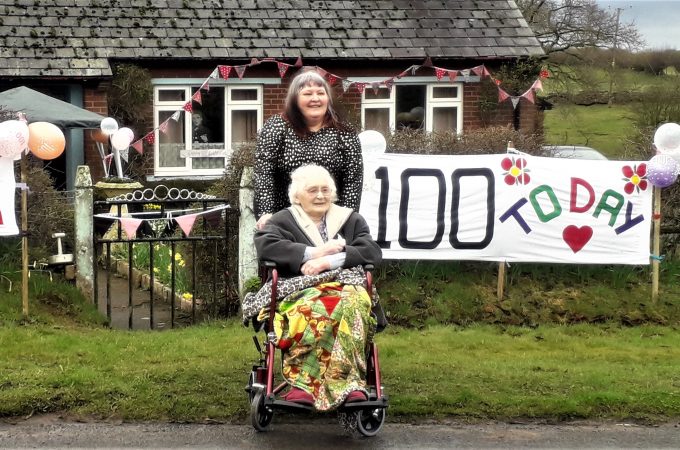 The 100th Birthday of Peggy Hodgson

On Monday, 29 March 2021 Peggy celebrated her 100th birthday. We may have been in “Lockdown” but family and friends were still able to make it a very, very special day and one to remember. In preparation, a gazebo had been erected in the garden and bunting, balloons and banners adorned the house and garden. Dozens of cards were delivered, messages received via Facebook and 84 cards were received in total. Three days of celebrations…. all at a safe distance…. left her children, John and Margaret, exhausted but Peggy relished every moment.

Peggy’s mother worked ‘in service’ at Black Dub just along from Carlatton Mill before marrying her father, born at Faugh. Peggy was born at The Lodge at Highhead Castle, where her father worked as chauffeur to Mr Cavaghan of Cavaghan and Gray, one of the largest employers in Carlisle at that time. Aged 9, Peggy and her parents moved to the factory site on London Road.

At the age of 14, she went to work at Metal Box and during the Second World War she can remember that one of her duties was making components for gas masks. It was at Metal Box that she met her husband-to-be, who later qualified as a Chief Engineer in the Merchant Navy, they married in 1956 and together with her parents built their home at Maxwell Hill on land given to them by her Uncle Jack who farmed at Townfoot, Cumwhitton. Memories include cycling out to Cumwhitton during the War, remembering her uncle taking her onto the moss to cut peat for the fire, and her grandmother telling her of trips to Carlisle Market with the pony and trap to sell eggs and butter!

Going on the internet confirmed what a special year 1921 was. George V was on the throne. It was the year that Prince Philip was born along with John Glen the first American astronaut to orbit the earth. It was the year that Tommy Cooper, the magician was born as well as Charles Bronson the Actor. The list goes on and on with the birth of Donald Campbell and Peter Ustinov among them. I suppose you will need to be a certain age to recognise many of the names on the list! In addition I found that in 1921 there was the first recorded performance of the illusion of “sawing a woman in half” though I doubt that Peggy will remember the event!

Among many special moments of Peggy’s birthday celebrations was a beautiful card sent by the Queen. We all wish Peggy a very special year and a belated Happy Birthday.

Cumwhitton Parish has been very fortunate to have a fair number of residents who have lived long lives through extraordinary times and we have been lucky to hear about their experiences.