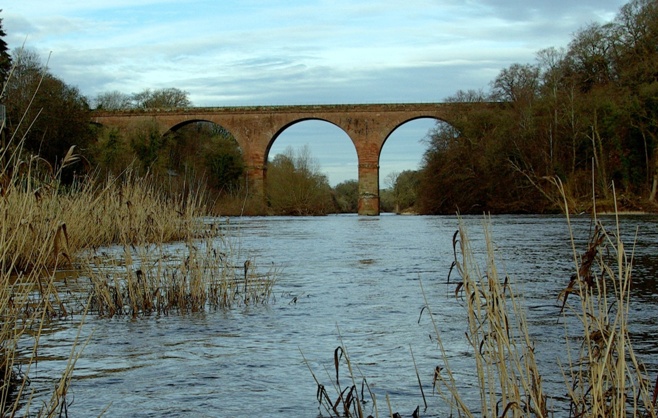 A short walk back in time along the river Eden. February 27, 2014Uncategorized, WalksOff

Less than three kilometres from start to finish, this will be an unforgettable walk. Park close to the railway crossing at Great Corby. Then, walk across the crossing and take an immediate left turn to walk alongside the railway cottages towards the railway bridge over the river Eden. The Grade 1 viaduct was built in 1834 with the foot bridge being added in 1851. For those who do not have a head for heights, the one hundred feet to the river below feels much, much more. Cross the foot bridge over the railway line at Wetheral Station and look for the footpath sign, “99 Steps”. It is good fun to count the number of steps as I am sure that the sign is inaccurate, but I was not prepared to go up and down to check twice! After a short walk south take a left down to the river path. At this point you will spot a stone carved winged bench with the softest looking stone cushions. This incredible creation was carved by the sculptor Tim Shutter in 1999 to celebrate the millennium. A short break here will give you the best view of the viaduct.

High above the banks of the river standing proudly is Corby Castle. Not much of this building can be seen, but its stately pride is represented by a magnificent cascade of water tumbling down more than a hundred feet towards a lawn with a statue of Nelson, before emerging through an arch to join the Eden. This view is certainly a great surprise on a tranquil walk. Continue along the river path until there is a fork, take the left path and you will soon have yet another surprise. Walk down to a gateway in the rock. This will lead you into three chambers carved into the sandstone. Known as the St Constantine’s Cells, and thought to have been occupied by this hermit in the Sixth Century. In later years the monks used these caves for grain storage and refuge when danger was near.

Retread your footsteps for a short distance to emerge into a field, then take the footpath back towards Wetheral. At the gate turn right towards the remains of the Priory.  Built by the Monks of St Mary’s Abbey at York, all that now remains is the Gate House. Now managed by “English Heritage”, this tower is open on Sundays  and free of charge. Well worth a visit with very informative plaques describing the use of each room, Including a notice that states “ Wrongdoers from elsewhere could claim refuge from arrest…..”. Children will certainly enjoy this adventure.

The final place of interest on this short walk is Wetheral Church. The setting is perfect. However, take a step inside to view the memorial statue of “Faith” by Joseph Nollekens, often described as the most beautiful statue in Cumbria. The story behind the memorial is as incredible as the statue is beautiful.